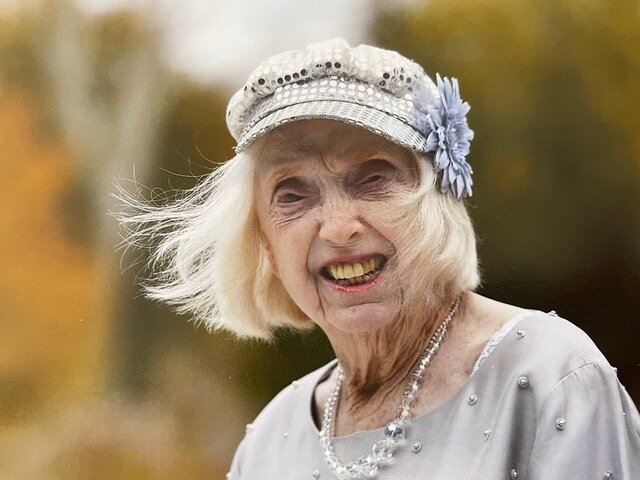 Please share a memory of Sharon to include in a keepsake book for family and friends.
View Tribute Book

Sharon Joy Workman, 91, died peacefully at her residence at the Edgehill Retirement Community in Stamford, CT surrounded by her children on November 8, 2021.  She was born on May 20, 1930 in Louisa, KY, the second child of Jessie B. Adkins and Charlie B. Workman. She was formerly married to the late Joseph P. Corsiglia, with whom she had four children, J. Patrick, Jr. (Christina) of Lake Forest, IL, Dr. Joan Breen (Andrew) of North Hampton, NH, James G. (Christine Gottlieb) of Brooklyn, NY, and Cynthia (Ali C. Höcek) of New York, NY.

Growing up during the Depression in West Virginia and raised by her school-teacher mother, Joy’s childhood was not easy, but she credited her mother with inspiring her love of learning, her curiosity, and the courage to take risks – to go and see what was on the “other side of the mountain.” She often said that her mother’s profession as a teacher inspired her to become a journalist. Upon enrolling at Marshall College in Huntington, West Virginia, she began her foray into journalism as the associate editor of the school’s newspaper. While at Marshall she also worked as a feature writer and columnist for the Huntington Herald-Dispatch, for which she wrote the series “How Huntington Lives.”  After graduating in 1952, she took her mother’s advice, but rather than the other side of the mountain, she ventured to the other side of the world.

Joy’s first job after college was in Tokyo where she worked for the U.S. Army as a military intelligence analyst in the Far East Command’s Psychological Warfare Branch during the Korean War.  After residing there for two years, she traveled with several women through twenty-four countries, returning to the US in 1954. She then began work as Life Magazine’s first high society reporter after publisher Henry Luce decided readers wanted to see ball gowns and chandeliers rather than bikinis and pool parties. Highlights of her time at Life included the opportunity to work with many acclaimed photographers including Margaret Bourke-White, Alfred Eisenstaedt and Cornell Capa, and a month-long sojourn in Cuba with the DuPont family. Earning a steady income also allowed her to support her mother’s desire for a college education.

Joy married Joseph P. Corsiglia of Gardner, Massachusetts in 1957, with whom she raised their children in Rowayton and Darien, Connecticut.  After her fourth child was born, she returned to work for Time, Inc., where she was as a researcher, reporter, and editor at People Magazine for many years following its launch in 1974. A 1989 review she wrote of Helen Frankenthaler’s traveling exhibition Works on Paper 1949-1984 was undoubtedly her most memorable assignment as she was able to interview the artist at length. She has been included in Who’s Who of America and Who’s Who of Women in America.  After retiring, she participated in several elder hostels internationally, spent time in France each year for thirteen years, and received three Master’s degrees – two in Literature, from the Bread Loaf School of English at Middlebury College and from Oxford University, and a third in Creative Writing from Dartmouth College.

She was predeceased by her beloved sister, Gae Nelle Ellixson of Barboursville, WV and her brother, Samuel K. Adkins of Tucson, AZ. She is survived by her half-siblings Carol Sue Nagy, Steve Workman and David Workman, several beloved nieces and nephews, as well as five strapping grandsons, Luke, Peter, Simon, Thomas, and Alexander, her cherished granddaughter Louise, and Anatole, her singular step-grandson.

During her time at Edgehill, Joy was a well-known presence, participating in all activities, as well as being a member of the resident council and other committees. She also introduced a number of programs and activities, including the New Yorker and short story discussion groups, a Spanish class, and “Table 61,” an open table in the dining hall for those eating alone. She also directed and performed in a number of plays, most memorably three times as Melissa Gardner in A. R. Gurney’s Love Letters – after which there was not a dry eye in the audience.

Joy was well-known for her joie de vivre, her love of her children, her curiosity, her love of a good laugh, a desire to dance, and an enduring kindness towards, and appreciation of everyone she encountered.

A family graveside service was held on Saturday, November 13, 2021 at the Workman Family Cemetery in Louisa, Kentucky, followed by interment.

Joy’s life will be celebrated at an Edgehill reception in early 2022. Her many distinctive hats, visors, caps, tiaras, berets, wigs, beanies, fascinators, and turbans will be offered as mementoes to those attending.

Joy will be missed and remembered lovingly by all who knew her.

In lieu of flowers, and in honor of Joy’s love of reading, gardens, and eager minds, memorial donations are suggested to the Children’s Learning Centers of Fairfield County in Stamford at https://clcfc.org or to the Isabahlia Ladies of Elegance Foundation, Inc. at https://www.isabahlialoefinc.org. Some of Joy’s happiest times in recent years were spent reading and playing with the children at the CLCFC, taking walks in the Edgehill gardens, and designing holiday and flower arrangements for Edgehill’s communal areas. The Isabahlia Foundation, based in Brownsville, Brooklyn, supports five community gardens by growing produce and flowers with members of the community, running culinary education programs for youth and adults, maintaining an apiary, and hosting farmers markets and Easter egg hunts. The foundation’s newest project is an educational pavilion designed by students of Joy’s son-in-law for year-round use at one of the Isabahlia gardens.

Share Your Memory of
Sharon
Upload Your Memory View All Memories
Be the first to upload a memory!
Share A Memory