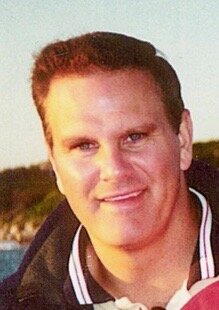 Obituary of James A Feeley III

Please share a memory of James to include in a keepsake book for family and friends.
View Tribute Book

James Aloysius Feeley III, born in Hanover, NH, and raised in Winchester, MA, was the son of the late James Aloysius Feeley, Jr., and Patricia (Larkin) Feeley. He died at home in Darien, CT, on Wednesday, December 28, 2022, surrounded by his family after valiantly living with pancreatic cancer. He was 57.

He is survived by his wife, Alison (Sughrue) Feeley, whose loving strength buoyed him throughout his illness; and his children, Jack Larkin Feeley and Caitlin Jane Feeley, of Darien, CT, who were truly both his pride and his joy; his sister, Traci (James) McCormack of Scituate, MA; his brother, Mickey (Lisa) Feeley of Wakefield, MA; many adored extended family members.; and countless friends.

After graduating from Winchester High School, Jim went to Colby College, where he majored in Economics and captained the Colby football team; he then earned a Master's degree from the University of Michigan Ross School of Business. Upon receiving that degree, he began his long and established career in finance. After having completed the investment banking training program at Chemical Bank in the '90s, Jim continued an impressive career, building and restructuring private equity and debt vehicles for numerous global entities that he co-founded and advised, most recently at Investcorp Credit Management US LLC.

Jim loved rooting on not only Winchester, Colby, and Michigan, but also any of the Boston teams, whose victories were especially sweet to him after he had moved into Yankee Territory. However big a fan he was of those teams, he will always be remembered as a Blue Wave "Super Fan" and the most ardent and loyal supporter of any team either of his children played—or had played—on. He happily spent many hours on the sidelines at Darien High School games, in the bleachers at Darien volleyball matches, and in the stands at Bucknell lacrosse games. His fervor was not limited to sports: He would root you on in whatever endeavor you pursued–or that your children were pursuing. In fact, if you were unable to make one of your own children's games, he might have been there, enthusiastically cheering them on.

Jim was an exemplary host, who believed that the more was indeed the merrier. Even as his health worsened, his second question to anyone visiting was "Can I get you anything?" His first was always a heartfelt "How are you?" Whether the gathering was a dinner party in Darien or an over-sand expedition in Chatham on Cape Cod, Jim had a knack for orchestrating events that created binding memories.

While he reveled in a crowd, Jim's greatest source of joy was his family. His wife, Alison, was his best friend and favorite co-host. He treasured his children, Jack and Caitlin, who made him prouder than any of his many accomplishments did.

Always generous of spirit, Jim quietly bestowed his generosity and kindness on all those lucky enough to love and to be loved by him.

In lieu of flowers, please consider supporting our efforts at the Pan-Mass Challenge on Cape Cod next August in Jim's honor either through riding, cheering, or celebrating after. Jim rode in the Pan-Mass Challenge, and it always was an experience he cherished. His inspiration and memory will sustain us as we meet this challenge, too. Click here https://profile.pmc.org/JF0378 to access our PMC page.

Share Your Memory of
James
Upload Your Memory View All Memories
Be the first to upload a memory!
Share A Memory