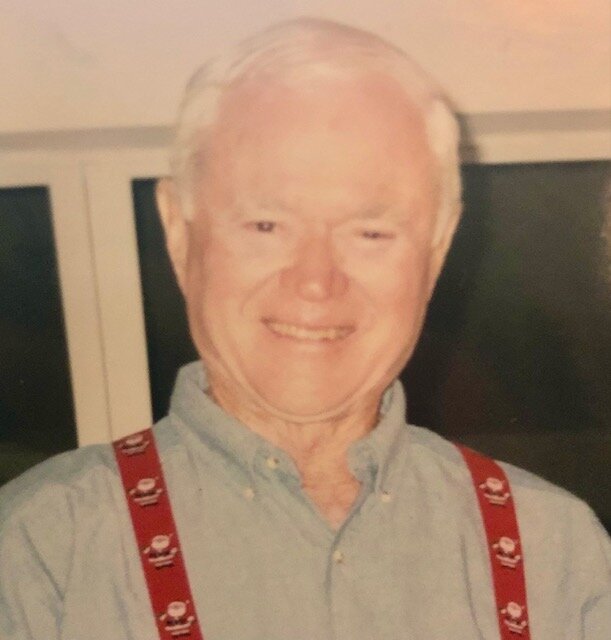 Please share a memory of Walter to include in a keepsake book for family and friends.
View Tribute Book

Walter R. McCurdy, beloved husband of the late Marijane McCurdy, died at age 95 in Palm City, FL on June 26, 2022. He was married for 58 years, and the father of five. To all who knew him, he was a man of enthusiasm, of faith in God and one who had a great love of his fellows.

The son of Walter F. and Irene McCurdy, Wally was born in Brooklyn, NY, in 1926. Wally met Marijane while a lifeguard at Breezy Point. They married in July 1951 and thereafter resided in California and a number of cities including Darien and New Canaan, CT. After retirement, they moved to Stuart, Florida for the last thirty years.

Wally is survived by his children: Bonnie, Mary, Wally Jr. and his wife Diane; Loraine and her husband Bob Little. He was predeceased by his wife, Marijane, in 2009 and his son, Matthew, in 2018.

In addition, he had six grandchildren who will miss their beloved "Pop Pop" very much: Lila and her husband, Drew Capra; Cade, Johnny and Patrick McCurdy; Redmond and Matthew Little. All of us owe our sense of humor to our dad who loved to joke and could appreciate fun in most things.

Walter is also survived by his sister Irene Hanratty and predeceased by his brothers, Dr. Richard McCurdy, and Reverend William McCurdy, S.J.

Wally was a member of Holy Redeemer R.C. Church in Stuart, FL. He was a member of the Third Order of St. Francis and had been a Lector and a Minister of Holy Communion for many years. In addition, he loved golfing at Silvermine Golf Club and the Ocean Club in Stuart, sailing at Noroton Yacht Club, walking and biking. A world traveler, fascinated by politics, and delighted by people, Wally had a wonderful life. He had a fabulous, fun business career at Bristol-Myers Squibb, with so many teammates, a loving, life mate in Marijane and boundless energy, optimism and joy. He leaves behind a close, humorous and thriving clan.

Walter received his A.B. degree from Harvard College, 1950 and an MBA from Harvard Business School in 1951. He played varsity basketball there and also earlier at St. John's University and Tufts College. He received the MVP award at the undefeated National Champion Iowa Seahawks of the U.S. Navy Training Command. After that, he worked for American Broadcasting Company ('53 – '59). Next, he worked at Bristol Myers-Squibb from 1959- 1985 as VP of Sales. He was Chairman of the Sales Executive Club of N.Y. During that time, he was the Distinguished Man of the Year in Marketing at CW Post/ Long Island University ('74) and was inducted into the National Sales Hall of Fame ('86). He joined the faculty of the Fordham University Graduate Business School in Tarrytown ('85- '92) as Director of the MBA program.

Wally was a strong supporter of many clubs. Besides coaching boys' leagues for many years, he coached the girls' varsity basketball team at Sacred Heart Academy in Stamford, CT for seven years. He was a member of many organizations. These include: the Harvard Club of NY, Friendly Sons of St. Patrick in New York (life member), Navy League (life member), the American Legion & Veterans of Foreign Wars (life member), and the Knights of Columbus of Stuart, FL. In addition, he belonged to the New York Athletic Club, the Coffee Club in Stuart, FL, the Wild Geese, Senior Men of Darien and New Canaan, and the Rotary Club.

Wally was a person who could see the good in any situation. He believed that all trials offer opportunities to grow. He cared deeply for his children and wife and was a power of example of how to live life well and fully. Most admirably, when his loving wife died, he grieved, but also continued to live and find joy even in his greatest sorrow. He will be deeply missed.

Services will be held at St. Aloysius church in New Canaan, CT at 21 Cherry Street on July 11 at 10 AM. Officiant: Rob Kinnally.

In lieu of flowers, we ask that you make a donation to Wally's high school, Brooklyn Prep. The Brooklyn Prep Alumni Association supports Jesuit education in the New York area. Please click on the link https://brooklynprep.org/ways-to-give/ to make your donation.

Share Your Memory of
Walter
Upload Your Memory View All Memories
Be the first to upload a memory!
Share A Memory