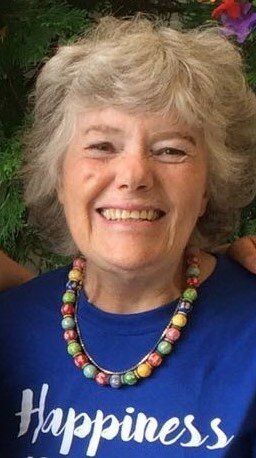 Please share a memory of Susan to include in a keepsake book for family and friends.
View Tribute Book

Susan Bock Frayer, 79, of Rowayton, CT passed away peacefully on June 25 at her home, surrounded by family, after a long battle with cancer.

Susan was born in Brooklyn to the late Kay & Charles Bock on Nov. 2 1942, and raised in the Bronx. She was educated at St. Philip Neri School, the Academy of Mount St. Ursula and Lehman College, CUNY.

After college, Susan lived in Manhattan and worked in HR for Mobil Oil, the Singer Corporation and ABC. In the 1980s, she taught at United Church Nursery School in Rowayton, and in the 1990s, she worked for Oxford Health, later United Healthcare – from which she retired in 2010. In recent years she taught English at the Norwalk Public Library, as part of the Greater Norwalk Literacy Volunteers.

In 1969, Susan took a chance on a guy named Jim Frayer – their first date was a Rangers game at Madison Square Garden – and spent the rest of her life with him. Susan and Jim celebrated their 50th wedding anniversary in 2020. Together they traveled to Bermuda many times, cruised the Caribbean on the Queen Mary, went wine-tasting in Bordeaux, rode camels around the Giza pyramids and explored the cliffs of Moher in Ireland. In between, they raised two children and one grandchild – for whom Susan recently learned the lyrics to the Paw Patrol theme song.

In 1976, Susan and Jim settled in Rowayton, where they became founding members of the Rowayton Yacht Club. Susan was a longtime PTA member at Rowayton School, a Brownie and Cub Scouts leader, a member of the Garden Club, the Knitting Club – and the first-ever costumed Easter bunny at the Rowayton Civic Association's annual Easter Egg Hunt. She cherished evenings on the dock at RYC with her book club friends.

During ten years of treatment at the Whittingham Cancer Center of Norwalk Hospital, Susan became known to fellow patients and staff as "Mayor Frayer." Memorial donations may be made to the Whittingham Center at 34 Maple St. Norwalk, CT 06856. https://www.nuvancehealth.org/giving. The family wishes to extend additional gratitude to the Visiting Nurse & Hospice Network of Fairfield County.

To send flowers to the family or plant a tree in memory of Susan Frayer, please visit Tribute Store
Wednesday
29
June

Share Your Memory of
Susan
Upload Your Memory View All Memories
Be the first to upload a memory!
Share A Memory
Send Flowers