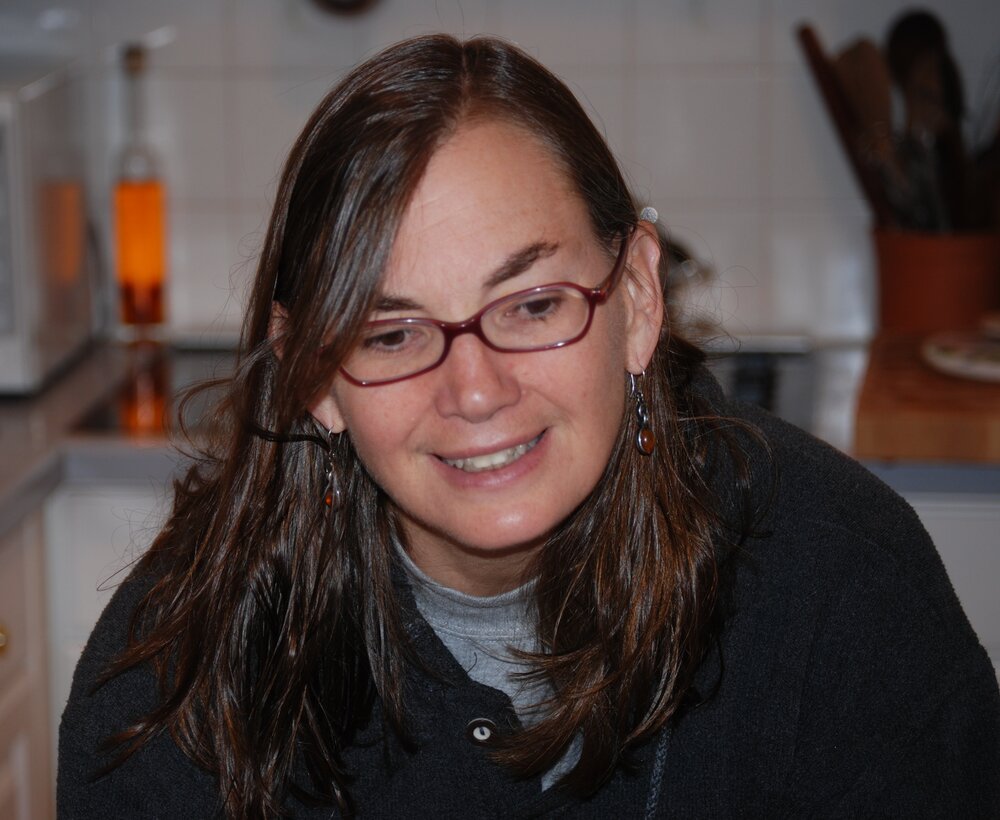 Please share a memory of Pamela to include in a keepsake book for family and friends.
View Tribute Book
Pam Heberton passed away quietly at home in the loving arms of her husband, daughter, and son on Sunday evening, March 6th, 2022. This ended her long battle with lung cancer, which she fought with her typical inner strength and determination. Born in New York City in 1958, Pam was the loving only child of Harold and Alice Martin. Pam grew up in the shadow of the George Washington Bridge on Cabrini Boulevard until she moved to Darien, CT in the early 1970's. Her mother's family were longtime residents of Norwalk and Pam often recounted visiting her grandmother's small farm there and gathering eggs for the family. Pam attended both Middlesex Middle School and Darien High School and graduated in the bicentennial year of 1976. During her time at DHS, she was heavily involved with staging plays put on by the school's Theatre 308 company. That was an early use of her artistic creativity that was ever-present throughout her life. Pam was exceptionally intelligent and used that to propel herself through a successful academic and legal career. It started at Sarah Lawrence University, but she transferred to Colgate University for her final two years. This was a blessing to her future husband Dick Heberton, for that is where they met when they worked as photographers for the school newspaper. Pam and Dick both went on to Indiana University, where Pam graduated magna cum laude from the School of Law in 1984. She passed the California State Bar in 1984 and began a career as a litigator, initially in private practice, but ultimately as an Assistant United States Attorney in the Central District of California. Pam filled her life with an amazing array of adventures together with her adoring husband. They were married for forty wonderful years and had two cherished children, Jen and Eric. Pam and Dick moved back to Darien in 1992 to be closer to her parents. Pam focused on raising the children and being involved in the community. She was especially active at St. Luke's Church where she was instrumental in starting their weekly Community Suppers and for several years helped organize and run the Christmas fairs, the Dove Box collections and the Gathering of Angels. Pam was a lifelong artist. She used her talents across multiple mediums, from pastels and watercolors to needlepoint, quilting, rug hooking and pottery, to create beautiful works of art. This ultimately led to her second career, where she took ownership of Art & Soul, a paint-your-own pottery store in New Canaan, CT. Pam worked tirelessly at providing an entertaining and educational experience to young and old alike. She threw dozens of children's birthday parties and loved every one of them. More importantly, she touched many members of the community there, from the high schoolers taking on their first jobs to the special needs students of New Canaan, who were enthusiastically welcomed to the studio by Pam. Pam loved to travel and read books. She often devoured multiple books in a week. She had a close-knit group of friends, affectionately called the Loons, who met on a regular basis to discuss a book they all read. She traveled all over the globe in search of adventure and learning. Some of her favorite trips included going to Greece and Turkey with her husband, to China with her son Eric and to Italy with her daughter Jen. Her indomitable spirit was clearly evident by the fact that she spent last summer planning a trip to Iceland this year where she had hoped to see the northern lights. But her favorite spot was at her family's summer home in the Adirondacks, known as Camp Pine Knot. There she spent the days hiking, kayaking, painting, picking wild blueberries and spending time with extended family and her deeply loved black labs. Pam's funeral service will be on Friday, March 11th at 3:00 pm at St. Luke's Church in Darien. Reception to follow at the family's home. To make a donation in Pam's memory, please consider her favorite charity, run by her niece Renata, called Angelica Village. Its focus is on helping families and unaccompanied children seeking refuge from war and homelessness make a successful integration into the community. https://www.angelicavillage.org/
To send flowers to the family or plant a tree in memory of Pamela Heberton, please visit Tribute Store
Friday
11
March

Share Your Memory of
Pamela
Upload Your Memory View All Memories
Be the first to upload a memory!
Share A Memory
Send Flowers