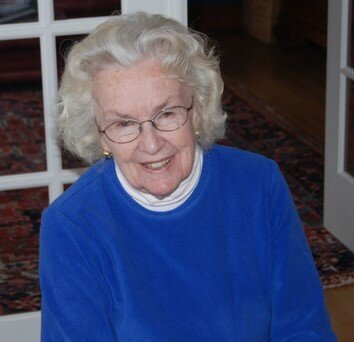 Please share a memory of Mary to include in a keepsake book for family and friends.
View Tribute Book

Mary Patricia Anne Fairbrother Crane, (Pat), of Darien crossed the bar on February 17, 2022. The daughter of Charles and Vera Fairbrother, Pat was born in Jamaica NY on August 25, 1924. Until the age of ten pat lived in Queens, NY.

It was in Queens that Pat realized she had both the love and, more importantly, talent as a swimmer and a diver. In fact, her career as a diving star began at Jone's Beach, NY, where seven-year-old Pat was featured diving from a 33-foot platform with Olympic swimming champion and actor Johnny Weissmuller.

Pat moved to Coral Gables, FL when she was ten years old. She and her sisters, Jeanne, (Jim) and Ellen, (Skip), spent hours practicing their swimming and diving. According to her sister Jim, Pat would rather be in the pool than anywhere else. At age 11 Pat won the Florida State Senior and Junior Diving crowns at the same time, and successfully defended them for the next four years. She had qualified first for the 1936 Olympic Games in Berlin but was held back by her parents because of her age. She then set her sights on the 1940 Summer Games and was regarded as a "shoe in" for victory off the 10-meter platform. Unfortunately the games never took place because of the war.

In 1940 Pat won the Women's Senior National diving championship and turned professional. Following her National Championship victory Pat and her sisters engaged in a 12,000-mile tour across North America that included stops in Banff and Toronto. Pat also appeared in dozens of advertisements, newsreels, movies, and short subjects during her diving career.

In 1945 Pat married her best friend and the love of her life, Bob. Until Bob's passing in 2016, they were inseparable. Bob tried his hand at diving, (he was relegated to the "diving clown" role), and Pat tried sailing. Although barely 100lbs soaking wet, Pat's competitive spirit drove her to become Bob's secret weapon in a sailboat. She reveled in both the competitive and social aspects of her adopted sport and never looked back. Pat and Bob successfully competed in their beloved Lightning Class sailboat until 1977 when they retired from competitive sailing to take up coastal cruising. During the summer months you would find the two of them just messing around on their beloved "Hooligan."

Pat and Bob moved to Bob's hometown of Darien, CT, in 1956. They built their home on Driftway Lane, raised their family, and lived there until 2018. During this period Pat volunteered at the Children's Aid Society, Darien Book Drive, Boy Scouts, Cub Scouts, Girl Scouts, Tokeneke School Library as well as holding many volunteer positions at her favorite Noroton Yacht Club. Pat genuinely enjoyed taking care of others: wayward sailors, school chums, friends, family or just about anyone who needed a meal and a place to lay their head. She was always game to try new things, (she never quite felt the love for skiing or ice hockey), and she would often be found on the tennis court or the links. Up until her late eighties she would still teach her grand kids how to swim, complete a flip on the trampoline or bake a pie.

Pat is survived by a daughter, two sons, eight grandchildren, nine great grandchildren, (with two more on the way…). Pat's son James lives in Darien with his wife Brenda, her son William and his wife Victoria live in Weston, CT and her daughter Linda lives in Marblehead, MA. Pat was predeceased by her sisters. A celebration of her life will be announced in the Spring of 2022. Donations in her name may be made to the Noroton Yacht Club Junior Sailing Room.

Share Your Memory of
Mary
Upload Your Memory View All Memories
Be the first to upload a memory!
Share A Memory