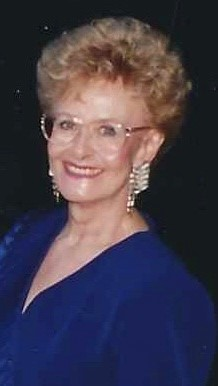 Please share a memory of Maude to include in a keepsake book for family and friends.
View Tribute Book
Maude Marie Morley passed away on Saturday, December 18, 2021. She was 92. Born on September 16, 1929 in Regina, Saskatchewan, she was the only daughter of the late Edward and Charlotte Kern. Marie grew up in Regina, Saskatoon, and Moose Jaw, Saskatchewan, Canada. Her fondest memories were the large family gatherings at her grandparents' home. She went to university in Toronto where she met her former husband H. Barclay Morley. A devoted mother and grandmother, her family was everything to her. A long-time resident of Stamford, she moved to New Canaan in 1997 until March 2019 when she moved to Atria in Darien. Marie was a former member of the Country Club of Darien and Nutmeg Curling Club. She golfed, loved playing bridge and spending time with friends. She was an impeccable dresser, with a great sense of humor. She was a two-time cancer survivor. She is survived by her son Edward Morley (Katheryn) of New Canaan; grandchildren, Casey Morley of Winsted, Edward Morley, Abigail Morley and Tucker Morley, all of New Canaan and daughter-in-law Jane Vero of Stamford. In addition to her parents, she is pre-deceased by two sons, Gary Stuart Morley and Christopher Engen Morley. Edward Lawrence Funeral Home is in charge of the funeral arrangements. A private service will be held.
To send flowers to the family or plant a tree in memory of Maude Morley, please visit Tribute Store
Online Memory & Photo Sharing Event
Online Event
About this Event

Look inside to read what others have shared
Family and friends are coming together online to create a special keepsake. Every memory left on the online obituary will be automatically included in this book.
View Tribute Book
Services for Maude Morley
There are no events scheduled. You can still show your support by sending flowers directly to the family, or planting a memorial tree in memory of Maude Morley.
Visit the Tribute Store

Share Your Memory of
Maude
Upload Your Memory View All Memories
Be the first to upload a memory!
Share A Memory
Send Flowers