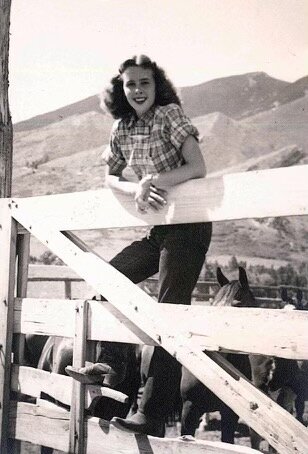 Please share a memory of Virginia to include in a keepsake book for family and friends.
View Tribute Book

Virginia Passavant Henderson, a longtime resident of Darien, CT, died there at The Residence at Selleck’s Woods on September 23, 2021 at the age of 99.  She was originally named Lillian Virginia but was best known as Passy or Sis.

Born on July 14, 1922 in Zelienople, PA, a town founded by her ancestors in 1802, Sis attended school in Zelienople and at Hathaway Brown in Cleveland, graduating from Connecticut College in 1944 with a degree in Chemistry.  While at Connecticut College she met Sid, who was stationed at the US Naval Submarine School in Groton, CT before he shipped out to the Pacific during World War II.  Following graduation, she worked in a laboratory in New York City until the war ended, at which time she and Sid married in Zelienople on October 5, 1945.  Their four children were born there.  When Sid transferred to the New York area in 1958, they moved to Darien.  Except for a brief return to Pennsylvania (Sewickley), Sis and Sid made Darien their home for the rest of their lives.

Sis was smart, strong-willed and self-motivated.  She made the leap from wife and mother to successful businesswoman in her early 50s, when she rejoined the workforce as a real estate agent.  She became one of the most successful Realtors in Darien and in 2014, at the age of 92, received the Realtor Emeritus award for 40 years of valuable contribution to the profession.

Sis was well known for the care she gave her clients—baking pecans for them every holiday season, inviting them to parties and ensuring their families were welcome in the community.  Many of them, while decades her junior, remained her friends until her death, especially her wonderful Tuesday Group who entertained her once a week for 15 years after Sid died.

Outside of family and work, Sis was a people person who loved entertaining and socializing in her home, at Wee Burn Country Club, around town or while visiting her many friends across the country.  Her love of travel took her to several parts of the world, but her favorite was East Africa where she visited eight times.  She was an ardent animal lover, with a passion for riding horses that she pursued into her 80s, particularly at Eatons’ Ranch in Wolf, WY.  While Sis took in several rescue cats, it was her dogs that claimed first place in her heart.  Sid joked that we would all be lucky to be reincarnated as one of Sis’s dogs.

Sis’s family expresses deep gratitude to all of those who cared for her and visited her, especially in her later years. They are particularly grateful to Sue McGraw, JoAnn and Rocco Mancuso, the Tuesday Group, Maia Hodge, Valery Dieudonne, Shana Gordon and the staff at Selleck’s Woods. A memorial service will be held on October 12, 2021 at 1pm at the Noroton Presbyterian Church, where Sis was a member since 1960.

In lieu of flowers the family suggests that charitable contributions may be made to Post 53 Darien Medical Emergency Services (https://post53.org/) or The Zelienople Historical Society (https://www.zeliehistory.org/ ).

Share Your Memory of
Virginia
Upload Your Memory View All Memories
Be the first to upload a memory!
Share A Memory