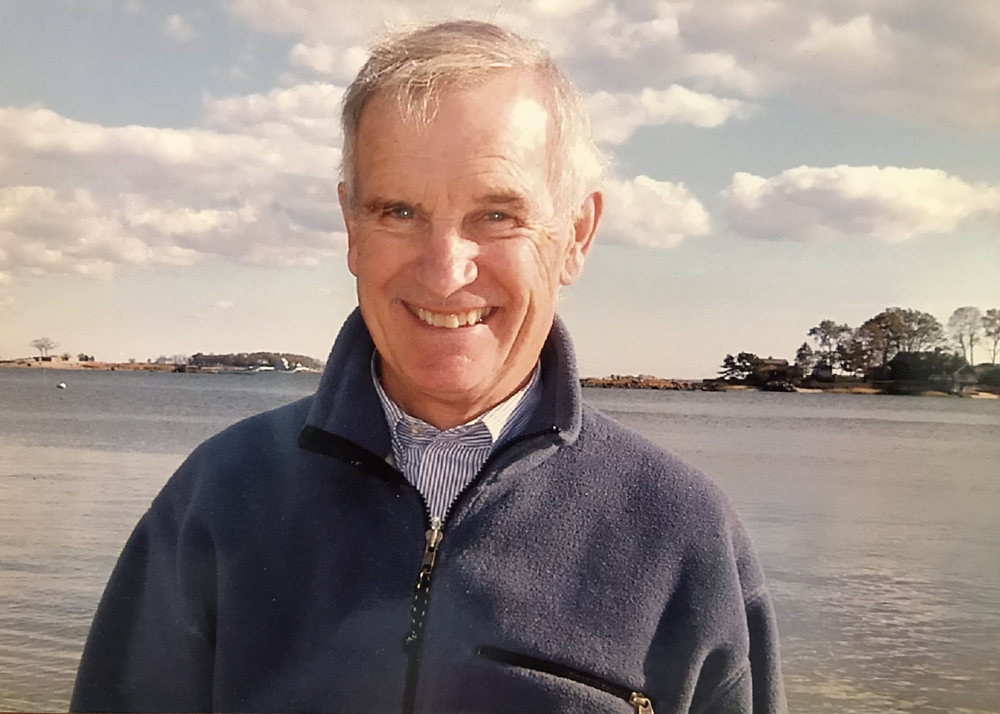 William Harlowe Miller, Jr. of Norwalk, Connecticut passed away peacefully at Stamford Hospital on August 30, 2021, after a long bout with dementia.  He was born on April 22, 1939 in Mineola, NY to William Harlowe Miller and Martha Clarke Miller of Lloyd Harbor, New York. Bill attended Phillips Exeter Academy (class of 1957) where he played on the varsity soccer, ice hockey, and lacrosse teams.  He then attended Princeton University, where he played on the varsity ice hockey team and was a member of the Ivy Club.  After graduating from Princeton in 1961, Bill served in the U.S. Navy, during which time he sailed on a destroyer, the USS Strong, and achieved the rank of Lieutenant.  Upon his honorable discharge from the Navy in 1963, Bill earned his JD from Syracuse University College of Law in 1966.  He also married Jean Piersol of Philadelphia in 1966.  After living in New York City for a few years, Bill and Jeanie settled in their current house in Wilson Point, Connecticut.

Bill was a trusts and estates attorney, initially with Humes, Botzow, Wagner, and Miller, and finished his distinguished career as a partner at Davidson Dawson & Clark, LLP of New York and New Canaan.  He retired in 2014.  Always generous with his time, Bill leaves a legacy of volunteering and service to the activities and cultures that provided him with so much joy throughout his life.  He coached his sons’ hockey teams in the Darien Youth Hockey Association, served on the Board of Trustees of Greens Farms Academy, the Board of Directors of the Amateur Ski Club of New York (ASCNY), and the Board of Directors of the Wilson Point Property Owners Association, for which he served as Secretary for 30 years.

In addition to ice hockey and skiing in Vermont and Utah, one of Bill’s primary passions was sailing.  He grew up racing Atlantics and other one-design boats on Long Island Sound at the Cold Spring Harbor Beach Club.  He went on to race in numerous Newport-Bermuda Races, Block Island Races, Vineyard Races, and Halifax Races. He also loved cruising the waters of the northeast with his family.  He was a member of the Norwalk Yacht Club, the New York Yacht Club, the Corinthians, and the North American Station of Royal Scandinavian Yacht Clubs.  In addition to his accomplishments on the water, and in keeping with his spirit of giving, Bill served as a board member and Chairman of the Junior Yacht Racing Association of Long Island Sound in the 1980s.  He was also a board member of the Norwalk Yacht Club and its Junior Sailing Program, for which he served as Chairman from 1981 through 1984.

Bill was a modest, unassuming soul who was loved and respected by all who knew him.  He is survived by his wife Jeanie, his two sons, William H. Miller, III (Rachael) of Crested Butte, Colorado and Thomas P. Miller (Sara) of Sammamish, Washington, and four grandchildren, Paige, Ellie, Brooks, and Skyler, who were the little lights of his life.  He is also survived by his sister, Martha Miller Massey and his brother, Ludlow Miller, as well as many beloved nieces, nephews, grandnieces, and grandnephews.  A memorial service will be held on October 9, 2021 at Saint Luke’s Parish in Darien, CT at 11:00am.  In lieu of flowers, donations can be made to the Norwalk Maritime Center, 10 North Water Street, Norwalk, CT 06854 - https://www.maritimeaquarium.org/donate.  Smooth sailing, Grandad.