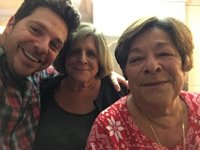 Barbara Ann Manjuck, a resident of Norwalk, CT, entered into eternal life surrounded by her loving family on Saturday, January 16, 2021 at Norwalk Hospital. Born and raised in Stamford on December 15, 1946, she is the daughter of Madeline Catherine Roman and the late Robert Wesley Milone. Barbara was a devoted single mother of two and grandmother of two. She retired from the Town of Darien Public Schools after 34 years where she began her career working in the Darien High School Cafeteria. Barbara progressed in her career and became a custodian at many of the middle and elementary schools. At the end of her career, she had been a mail courier for the Darien Board of Education. After her retirement, she dedicated her life to taking care of her granddaughters and lived with her son and oldest granddaughter. Besides her mother, she is survived by her step-father, Jose Roman. She is survived by her son, William Manjuck III and daughter, Melissa Ann Piney and her husband, Edward J. Piney. She is also survived by her two granddaughters, Anne Marie Manjuck and Colleen Madison Piney and three step-grandchildren. She is also survived by two sisters, Jacqueline Patricia Conetta and her husband, Anthony and Jo-Ann Sawitsky and her husband, Michael. Three great uncles and one great aunt, five nieces and nephews, five great nieces and nephews, and many other loving family members and close friends who she adored also survive. The family will receive friends at the Lawrence Funeral Home, 2119 Post Road, Darien on Friday, January 29, 2021 from 5:00 to 8:00 PM. A Funeral Mass will be held for family only with a private entombment at St. John Cemetery. In lieu of flowers, donations may be made to St. Jude Children’s Research Hospital, 501 St. Jude Place, Memphis, TN 38105, American Cancer Society, 38 Richards Avenue, Norwalk, CT 06854 or American Diabetes Association, P. O. Box 7023, Merrifield, VA 22116.