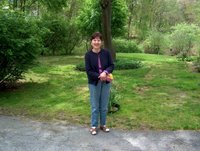 Catherine A. Skerrett, a 46 year resident of Darien, CT passed away on Saturday, December 26. Born October 20, 1937, in Brooklyn, NY she was the daughter of the late James J. and Louise Onorato of Brooklyn, NY. She was 83 years of age. Moving to Darien in 1974, Mrs. Skerrett owned The Puritan Variety store in Noroton until 1978 which she operated with her family. She took pride in her children and grandchildren’s accomplishments and always encouraged them in all their endeavors. She enjoyed the Darien Library, and patronizing local stores. In addition to raising a family, her primary enjoyment was painting. Starting in oils as a young girl, she also found expression through watercolors, charcoals, pen and ink, and most recently acrylics. She found inspiration in local scenes as well as in the finer details of the natural world around her. Some of her works, including portraits, are treasured in private collections. She always wanted to share with others the joy her artistic endeavors brought her. She was a loving person who was quick to open her home and heart to anyone in need. Mrs. Skerrett is survived by her three children, Edward Skerrett of Gladstone, MO; Katherine Slinsky and her husband Richard Slinsky of Darien, CT; Susan Skerrett of Darien, CT; granddaughter Jessica Skerrett and grandson Stephen Skerrett; her brother Dr Michael Onorato of Bellingham, WA and his wife Marie; and several nieces and nephews. She was predeceased in 2013 by her husband of 51 years Walter, and by her son Thomas in 2012. A private burial will be held at the Middletown State Veteran Cemetery. In lieu of flowers, the family asks that donations be made in Mrs. Skerrett’s memory to either The Shore Line Trolley Museum, East Haven, CT, or The Darien Library, Darien, CT.