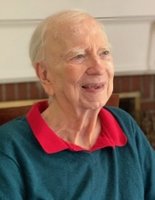 The sharpest mind in the room and most devoted father, Charles FitzGerald Raikes (“Jerry”) died peacefully on December 13, 2020 at his home in Rowayton, CT, surrounded by his two daughters, Jennifer and Vicki. He had recently celebrated his 90th birthday. The cause of death was cancer. Jerry was beloved by his family, friends and colleagues for his intellect, wit, and kindness. He was born October 6, 1930 in Minneapolis to Arthur FitzGerald Raikes and Margaret “Peg” Raikes (née Hawthorne). He had one older brother, John Michael Arbuthnot Raikes. He grew up in St. Louis and graduated from Benjamin Blewett High School as valedictorian. As a teenager, Jerry was active as a volunteer with the Congress of Racial Equality (CORE) in the civil rights movement. He canvassed door to door and participated in sit-ins to desegregate St. Louis department store lunch counters in the late 1940s. He earned his BA at Washington University in 1952, with Honors, Phi Beta Kappa and then received a Woodrow Wilson Fellowship to Harvard. He was drafted out of graduate school during the Korean War and served in the U.S. Army at Camp Chaffee for two years, earning the rank of sergeant before being honorably discharged. By the time he returned to Harvard, he had decided to study law instead of pursuing his Ph.D. in economics. He earned an MA in Economics and then moved on to Harvard Law School. Jerry deeply loved his career practicing law. Decades after the fact, his friends and colleagues still reminisce about his uncanny ability to anticipate problems and devise ingenious solutions. He was an associate at White & Case from 1958-1969, with a brief leave to serve as a consultant to the Federal Reserve. His career at The Dun & Bradstreet Corporation spanned a quarter-century. He served as Senior Vice President and General Counsel until his retirement in 1995. He is survived by his daughters with his ex-wife, Antonia Raikes, and his four grandchildren Keir, Audrey, Dorothy, and Ramsay, as well as friends and family around the world. If you would like to make a gift in Jerry’s honor, please donate to his favorite non-profit, The TLC Foundation for Body-Focused Repetitive Behaviors, at bfrb.org/donate.