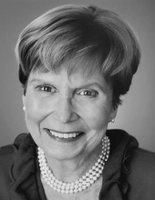 Margaret Worrell Anderson, 89, passed away at home on November 2, 2020. Born on May 28, 1931 in Schenectady, New York, to Margaret (Geiger) and Benjamin Franklin Worrell she grew up in Palm Beach, Florida. She attended Duke University where she met the love of her life, William Heartly Anderson. Affectionately known as Mugsie, she leaves behind her beloved husband of 67 years, Bill, and four devoted sons: William (Oz) and his wife, Cindy, of Cameron Park, California, Jeff, and his wife, Karin, of Hingham, Massachusetts, Mark, and his wife, Christine, of Manchester, New Hampshire and Dan, and his wife, Julia, of Stamford, Connecticut. She was adored by her eleven grandchildren, Ashley, Melissa, Tyler, Logan, Austin, Eric, AnnaRae, Maxwell, Luke, William and Samuel and her great grandson, Devin. Mugsie and Bill had their first date at an Episcopal church supper. Mugsie was an active member of the Episcopal Church in every community which she called home. She marshalled her family through many moves. She and Bill lived in Florida, Georgia, Alabama, Mississippi, Louisiana, Tennessee, Connecticut and Minnesota before they settled in Hingham, Massachusetts, where they lived from 1969 - 1980. In Hingham, they were very involved at St. John’s Episcopal Church. Since 1980, Mugsie and Bill made Darien, Connecticut home and attended St. Luke’s Episcopal Church, where she dedicated herself to the Person-to-Person scholarship program as well as altar guild and Sunday School. The spark that is Christ’s love shone through her. She raised four boys with the same faith, humor and joy that she shared with her many dear friends. She was an empathetic soul who supported her Hospice care-receivers, as well as others, through countless, quiet acts of kindness. Her warm sense of beauty is reflected in her oil paintings and her love of nature and gardening. She touched many lives with her joyful, loving spirit. She will be greatly missed by all who knew and loved her. In lieu of flowers, donations should be made to St. Luke’s Episcopal Church, 1864 Post Road, Darien, Connecticut 06820. Due to COVID 19, there will be a small, private service.