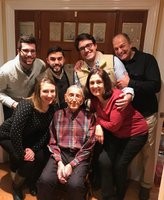 Alwin A. Lehmann, 90, engineer, investor, Army veteran, devoted and loving husband, father and grandfather, passed on to eternal life at Stamford Hospital on October 22, 2020 after enduring a series of illnesses. He was born on January 5, 1930 in Castrop-Rauxel, Germany, where he was trained as a mechanic during World War II. After the war ended, he came to America on a highly skilled work visa and lived and worked in N.J. He enlisted in the U.S. Army in 1954, and served in the Korean War, working in the Panama Canal on the utilization of guided missiles. It was also during this time, on November 22, 1955 that he became a U.S. citizen, one of the proudest days of his life. After an honorable discharge, he returned to N.J. to marry the love of his life, Marion Petracca. He went on to study at Newark College of Engineering, now New Jersey Institute of Technology to earn a BS in Engineering, and MS in Mechanical Engineering and an MS in Engineering Management. He worked at several management positions, including Bell Laboratories (AT&T) from which he retired in 1995. Mr. Lehmann loved to travel and be with his family, so when the children were young, summers were spent in Long Branch, NJ, "down the shore", at Marion's brother's family home, with her large extended Italian family who all loved and adored him. Other vacation time was spent on well planned trips throughout the United States, Canada and Europe, many of which included not only his wife and children, but also his sisters-in-law, his niece, and as the family grew, his grandchildren. He and Marion took many cruises throughout the world, and were blessed with wonderful friends and neighbors in their hometowns in N.J., IL, and CT. Mr. Lehmann, the devoted husband, cared for his wife, who was afflicted with Alzheimer's disease, for the last 10 yrs of her life until her dying day in 2016. Mr. Lehmann is survived by his daughter, Dr. Maryann Lehmann of Darien, CT, and his son, Allen Lehmann, of North Aurora, IL, a granddaughter, Lauren Murljacic and her fiance Justin Walsh of Boston, MA, and three grandsons, David Murljacic of Chicago, IL, Blaise Lehmann of Lombard, IL and Erik Lehmann of Melrose Park, IL, along with many nieces and nephews. He was predeceased by his wife, Marion (Petracca) Lehmann, and his daughter, Cynthia Ann Lehmann. The family would like to thank the home care team of aides, his LPN, visiting nurses, as well as the staff at Stamford Hospital for the exceptional care given to Mr. Lehmann during his final time. Calling hours will be held on Friday, November 27, 2020 in the Lawrence Funeral Home, 2119 Post Road, Darien from 4 to 7 PM. A funeral mass will be held at Queen of Peace Catholic Church in North Arlington, NJ, and burial will be private. Donations may be made to honor Mr. Lehmann to Post 53, the EMS for Darien. Darien EMS Post 53, P.O. Box 2066, Darien, CT 06820 or www.post53.info/donate