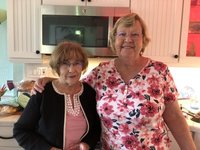 Phyllis Erlandson Mazik, 78, of Stamford, CT, and Waianae, HI, passed away Tuesday, August 25, 2020 after a three year battle with cancer. Her final days were shared with loved ones. Born on April 13, 1942 in Middletown, CT, she was the daughter of the late Ejnar (Bill) Leonard Erlandson and Mabel (Olsen) Erlandson, and her second mother Ella (Nelson) Erlandson. She spent her youth by Lake Pocotopaug in East Hampton, CT and graduated from East Hampton High School, class of 1960. Phyllis received a B.S. in Music Education from University of Connecticut in 1963, and later an M.S. in Education from University of Bridgeport. Early in her career, Phyllis worked as an elementary school music teacher in Newtown, CT. For most of her career, Phyllis worked as a Registered Sanitarian and Environmental Health Supervisor for the Stamford Health Department. She enjoyed building Lyme Disease awareness and contributing as a member of the Experiment Station Association of the Connecticut Agricultural Experiment Station. Phyllis also supported public access television as a producer and director. Phyllis will be remembered for her endless energy, kindness, sense of humor, and her many passions, including travel, gardening, music, writing, videography and photography. In the final years of her life, Phyllis wrote a musical and composed an original soundtrack. She also took all her daughters and grandchildren on a trip to Norway and Sweden to visit their relatives and ancestral homelands. Phyllis is survived by her daughters, Carrin Passaro Culotta of West Townsend, MA, Robin Passaro Merrill and her husband Peter Merrill of Sudbury, MA, and Deanna Passaro Larson and her husband Stephen Bialkowski of Logan, UT; and her grandchildren Cailley, Emma and Isabelle Culotta, Sydney and Hayden Merrill, and Terry and Laurie Larson. She is also survived by her brother, Richard Erlandson of East Hampton, CT, her niece Lynn Jennings, her nephew Richard Erlandson Jr., cousins, and her stepfamily. Phyllis was predeceased by her husband, Paul Mazik, her sister, Ruth Lawton, and her son-in-law, Mark Culotta. She was a devoted wife and caregiver to her late husband, Paul Mazik, and a beloved grandmother and great grandmother to his family including Todd, Karim, Lisa, Christopher, Nicholas and Michael. A graveside service will be held on Saturday, August 29, 1PM at Long Ridge Union Cemetery in Stamford, CT. The Edward Lawrence Funeral Home in Darien, CT, has care of arrangements. Memorial contributions can be made in Phyllis's memory to Children's Tumor Foundation (ctf.org) or Eugene O'Neill Theater Center (theoneill.org).