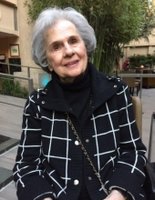 Dorothy Nedwick Grunewald, who, early in her life, worked for the U.S. Office of Scientific Research and Development and the newly-created United Nations, died peacefully, surrounded by her family, on Sunday, August 16, six days shy of her 94th birthday. She had been a resident of Stamford for 62 years. Her husband of 63 years, Theodore J. Grunewald, predeceased her on April 6, 2012. A member of "The Greatest Generation," Mrs. Grunewald was very patriotic and after graduating from James Monroe High School in New York City in 1943 she was anxious to find work that would support the war effort. To that end she enrolled in the Delehanty Institute on West 42nd St., which prepared students for civil service. She attended school at night so she could work during the day. She joined the U.S. Civil Service and, in March 1944, was appointed to work in the Office of Scientific Research and Development (OSRD). This agency, under the direction of scientist Vannevar Bush, was responsible for virtually all wartime military research and development and the creation of the Manhattan Project which developed the atomic bomb. The offices of the OSRD were located in the Empire State building, and, on July 28, 1945, a US Army Air Force bomber accidentally struck the building killing more than a dozen people. Mrs. Grunewald recalled how the building shook and swayed, and how the fiery debris of the plane rained down outside her office window. No one understood what was happening, yet she and her fellow workers calmly collected the secret documents they had been working on (including the carbon paper they were using) and carefully locked them in the safe before leaving the building. After the war and a brief stint with the U.S. Navy Department, in June 1946 Mrs. Grunewald was appointed to the Secretariat of the United Nations in Lake Success, New York, where she was assigned to the Educational Liaison Service in the Department of Public Information. She was responsible for producing educational materials about the UN and arranging educational tours and meetings. She attended virtually every General Assembly meeting at that time and sat, along with reporters and other staff, in her assigned seat at the 20-seat table that was then located at the center of the hall with the delegates of member nations surrounding it. She also escorted dignitaries such as Eleanor Roosevelt, Kirk Douglas, and Norman Rockwell, wined and dined delegates from many nations, and conducted educational tours of the UN and its protocols. A true beauty and a person of great poise, she was featured in many promotional and educational materials produced by the UN, including films, and also appeared in many newspaper articles about the UN. In August 1950 she and her colleagues began moving into the newly-completed Secretariat Building at its current location in Manhattan. Mrs. Grunewald and her husband lived interesting and glamorous lives for many decades. Not only did they enjoy their UN friends of many nations (her two best friends were from China and Norway), but Mr. Grunewald was an advertising executive in the early days of television and was influential in developing the television shows of that time. During those early years, ad execs did more than write ad copy; they discovered and developed talent and produced nationally syndicated shows and network evening news programs. Both the age of peace — represented by the newly-formed United Nations — and the golden age of television were dawning; it was an exciting time to be alive, surrounded by, and working with, other sophisticated and ambitious people from around the world. She met her husband through her cousin who was a fraternity brother of Mr. Grunewald’s at New York University. They were married on October 9, 1949 in New York City. Mrs. Grunewald left the UN in 1955 upon the birth of her first child. She quickly became the center of her own and her extended family — the one person in every family who does everything for everyone: hosted and entertained, cared for sick and dying family members, organized and arranged anything and everything. From Halloween to Christmas and from Easter to July 4th, her celebrations were family legend. The birthday parties she produced were sublime. When, in 1972, her husband changed careers from advertising in New York City to home-building and real estate in the Stamford-Greenwich area, she was there with him, working as his behind-the-scenes partner preparing estates for sale and conducting open houses. Mrs. Grunewald had a sharp and critical mind and was deeply informed about politics and current events up until her death. She had a sophisticated eye and appreciated good design and art — collecting it all her life. She loved classical music, the music and foods of many countries, nature, and animals. Her flower arrangements were stunning. She was an ardent operaphile and balletomane and although she had moved to the suburbs she delighted in constantly exposing her children to the fine and performing arts by frequenting Lincoln Center, Carnegie Hall, Broadway, MoMA, and SoHo art galleries, et al, via the New Haven line. She was born Dorothy Mary Niedzwiecki on August 22, 1926 in New York City to Julia Mykytyshyn of Lviv Oblast, Ukraine, and Leopold Niedzwiecki, of Poland. She was the youngest and last of four beautiful daughters. The family name was anglicized to “Nedwick" when the girls were teenagers. She is survived by her daughter and son-in-law, Carol L. Grunewald and Jeremy R. Rifkin of Washington, DC; and her son, Theodore J. Grunewald, Jr., of New York City. Mr. and Mrs. Grunewald were predeceased by their son Steven P. Grunewald in 1992. The family will receive friends at the Edward Lawrence Funeral Home, 2119 Post Road, Darien, on Thursday, August 27 from 4 to 6 pm. A Mass of Christian Burial will be held at St. Catherine of Sienna Church, 4 Riverside Drive, Greenwich, on Friday, August 28 at 11 am. Connecticut pandemic regulations requiring masks and social distancing will be in force. Internment will be private.