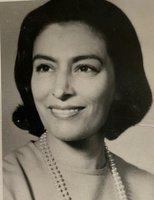 Lydia García Ras-Allard, a long-time resident of Darien, CT passed into the glory of God at her home on Saturday the 15th of August 2020. She lived 96 years. Lydia was born in Holman in northern New Mexico on the 8th of April 1924, and spent her early years in nearby Chacón. She was the daughter of José Timoteo García and Emilia Salazár García. Lydia received a Bachelor of Arts Degree from the University of New Mexico, and a Masters of Education from Fairfield University in Connecticut. She began her teaching career in Taos, NM but spent most of her career in the Darien and New Canaan (CT) public-school systems, teaching at Saxe Middle School for 24 years and retiring in 1988. In between teaching in New Mexico and Connecticut, Lydia shifted careers to the airline-travel industry, becoming the Assistant Manager of the Varig Airlines travel office at Rockefeller Center. It was there that she met the French singer, Michel, in 1956, and the two were married the following year on the 24th of February at the Fifth Avenue Presbyterian Church in New York City. The couple settled in Darien, CT where they would raise their family together and live for the next 44 years. The family attended the Noroton Presbyterian Church where Lydia was active in Bible study, taught Sunday school, and later served on the Mission Committee. In her retirement, she got a “second wind” working in the church office, part time, for several years. With a heart for the veterans she knew from her prep-school days who went off to World War II, Lydia, along with her sister, established The Menaul School Veterans Fund, a scholarship program to help its students with tuition costs. Once Lydia learned how to use a computer, there was no stopping her from writing her story of life in the pioneer days in New Mexico, life in the classroom, and life with her love, Michel. Lydia was predeceased by her husband, Michel H. Ras-Allard, of 47 years, and also was predeceased by her two brothers, Celestino and Ulysses Garcia and sister, Ernestine Arndt. She is survived by her son, Charles of Darien, her daughter Christiane Williams, son-in-law, Mark, and two grandchildren, Emilia and Samuel Williams, and a great grandchild on the way, all of Surrey, England. She is also survived by five half brothers and sisters: Naomi Miller of Springfield, MO, Hope Mares, Pauline Cummings, and Albert García all of Albuquerque, and Benjamin García of Chacón. A celebration of Lydia’s life will be held at Noroton Presbyterian Church in Darien, (date and time TBA), and will be webstreamed live. Interment will be private. In lieu of flowers, donations can be made to the Presbyterian Foundation – The Menaul School Veterans Fund.