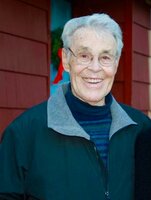 Clark Scott Johnson, a resident of Norwalk, passed away on Tuesday, April 19, 2022 in Norwalk.Born on December 5, 1926 in Rock Springs, WY, he was the son of the late Charles and Marjorie (Kemp) Johnson. He was 95. Clark graduated from the University of Southern California with a Bachelor of Science degree in Marketing. He was Vice President of Sales, General Manager of the Kraft Division for St. Regis Paper Company. He later joined Virginia Fibre where he served as EVP, Chief Operating Officer and member of the Board of Directors. He served in the Navy Air Corps as a Radio Gunner and subsequently served in the Army Transport Services as an Electronics Officer. He is survived by his wife, Sally Dean (Harrison) Johnson; three daughters, Sandra A. (Johnson) Murphy of Short Hills, NJ; Kathryn Harrison Whittemore of Malibu, CA; Lisa Carter Whittemore of Encinitas, CA; and seven grandchildren. He is also survived by his sister, Nancy Jokerst, of Walnut Creek, CA. A Memorial Service will be held on Saturday, April 23, 2022 at 1:00 PM at St. Luke's Episcopal Church, 1864 Post Road, Darien. To sign Clark's on-line guestbook, please visit www.lawrencefuneralhome.com.