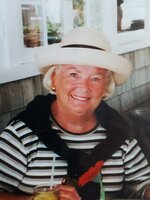 Jeanne Stanley-Brown of Naples, Florida and Nantucket, Massachusetts died on February 10, 2022. She was born, Jeanne Claire Olson to Claire Drake and Walter Rudolph Olson on July 12,1927 in Ridgewood, New Jersey. Jeanne graduated from the Englewood School of Nursing and became the head nurse on the surgical floor of the former Babies Hospital at Columbia Presbyterian in Manhattan. While working as a nurse and modeling for Barbizon, she attended Hunter College. Midlife she changed careers and attended the Parson's School of Design in New York to become an interior designer. Jeanne was always an active participant in the communities she lived in. In Ridgewood, she served as PTA president at the Glen School, volunteered as Vice President of Social Services and sat on the Planning Board. On Nantucket, she was a past President of the Tom Never's Civic Association, and member of the Tom Nevers Homeowners Association. She also supported Sconset's Union Chapel as one of the original members of the needlepoint beautification project. She was also a Trustee of the Union Chapel. In Naples, she was an active member of the Crescent Homeowners Association. She was married to Edward Garfield Stanley-Brown, MD (a great grandson of President James A. Garfield) in 1952 at Our Lady of Mount Carmel Church, Ridgewood, N.J. She was predeceased by her husband in 1998, both parents, and her brother, Herbert Drake Olson in 2005. Jeanne is survived by her children and their spouses: Jeanne (Jill) and Paul Driscoll of Norwood, MA; David and Kathy Stanley-Brown of Wyckoff, NJ; and Elizabeth (Beth) and Peter Horan of Darien, CT. She was devoted to her nine grandchildren and their spouses: Sarah, Emily and David Mehlman, Christopher and David Driscoll; Chelsea Stanley-Brown and her fiance Craig Brooks; and Mackenzie and Will Beuttenmuller, Reilly and devynn emory, Grayson and Camden Horan. She also adored her three great grandsons, William Edward (Teddy) and Peter Garfield Beuttenmuller and Hayes Garfield Mehlman. She is also survived by her sisters-in-law, Katharine Abbott and Nanette Olson, several dear nieces and nephews, and many friends from Naples and Nantucket. Interment and a Celebration of her Life will take place in 'Sconset at the Union Chapel this summer. Donations in her name can be made to St. Jude Hospital for Children's Cancer Research (501 St. Jude Place Memphis, TN 38105) or Siasconset Union Chapel Memorial Gift (P.O.Box 400 Siasconset, Massachusetts 02564) or online at https://sconsetchapel.org/waystogive.html.