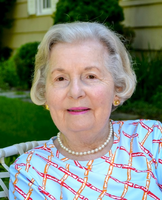 Joan Dreher Hopkins Beloved Mother, Grandmother and Friend With her family around her, Joan Hopkins peacefully passed away on Sunday, February 13, 2022 at her residence at Edgehill in Stamford, CT. Born August 25, 1930 in Orange, NJ, Joan was the youngest of two children of Monroe Franklin Dreher and Elizabeth Stirling Dreher. Joan was raised in Montclair, NJ and moved with her family to Darien in the early 1940s. She met Robert (Bob) Hopkins at a Darien Cinderella Dance in 1945, where he made sure that his name was the first on her dance card. Joan attended The Thomas School in Rowayton where she enjoyed her academic subjects as well as playing field hockey. She then attended Goucher College in Baltimore. She and Bob were married on April 11, 1953, shortly before Bob began Aviation Officer Candidate School in Pensacola, FL. After Bob's U.S. Naval service during the Korean War, they settled in Darien for a few years, then moved to Northfield, IL, where they raised their three daughters, Christina, Elizabeth and Susan. Joan devoted her time to her children and remained close to her Connecticut family, enjoying holidays, summer trips home to Connecticut and vacations to sunny places. In 1966, the family returned to Darien, where she lived on Pilgrim Road with Bob until 2021. A caring person, Joan volunteered for over 30 years at the Waveny Care Center in New Canaan, and was a devoted member of First Congregational Church in Darien, involved in many ministries through the years. She was an avid gardener, a golfer, a loyal friend to so many people lucky to know her warmth and charming wit. After retirement, Joan and Bob enjoyed winters in Delray Beach, Florida, where they could continue to play golf, be close to friends and host family gatherings. Joan is survived by her husband Robert Hopkins, her daughters Christina Winchester and her husband Ian of Bedford Hills, NY, Elizabeth Penner and her husband Melvyn of Garrison, NY, and Susan Axelson and her husband Peter of Reading, MA; her beloved grandchildren, Stuart and his wife Sarah, Philip, Hannah, Ethan, Timothy, his wife Heather and Page; her nephew Ted Siegler and his wife Suzy, her nieces Lucinda Brown and her husband Wesley and Nancy Stanesco and her husband Jack; and the many friends she cherished through their years in Darien. A private celebration of her life will be held at a later date. To share a memory or offer a condolence, visit www.LawrenceFuneralHome.com. Donations can be made in her memory to the ASPCA, www.aspca.org .