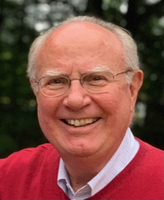 Stephen Phillip Smith, 78, of Darien, CT, passed away peacefully on Saturday, January 22, 2022. He is survived by his son Gregory C. Smith and his wife Victoria, and by his daughter Jennifer S. Tunnell and her husband Bertram. He is also survived by four grandchildren, Spencer and Lindsay Smith and Phoebe and Nicholas Tunnell, and by his former wife Judith S. Woods and several nieces and nephews. Steve was born in Salt Lake City, UT to Phillis A. and Wayne S. Smith on May 30, 1943. Steve was predeceased by his parents and three siblings, Barton, Susan and Thomas Smith. Raised in Colorado, Steve graduated from the University of Colorado, Boulder in 1966 with a B.S. in Business / Marketing, where he was a member of the Kappa Sigma Fraternity. He married Judith H. Shafer in 1965. Steve began his career in sales with Hallmark Cards, Inc. in Hartford, CT, and then moved to Long Island to work for Reynolds Securities in New York City. Steve settled in Huntington Bay, NY for the next 25 years where he raised his family and worked for a number of companies primarily in the automotive industry. Steve loved playing golf, paddle and tennis, and was a former member of the Huntington Winter Club and the Cold Spring Harbor Beach Club. Steve relocated to Columbia, SC in 2004, where he enjoyed the warmer weather, rooting for the Gamecocks and spending time with neighbors and friends. He finished his career as a Business and Financial Consultant with the South Carolina Department of Transportation, Minority and Small Business Affairs Department. Upon retiring in 2019, Steve moved back north to Darien, CT to be closer to his children and grandchildren. A master of the grill, Steve always enjoyed a good time with family and friends, and will be remembered for his laugh, his warm smile and his cheerful spirit. A celebration of his life will be held in May at St. Luke's Episcopal Church in Darien, CT. In lieu of flowers, donations may be made to St. Jude Children's Research Hospital (stjude.org) of which he was a lifelong supporter.