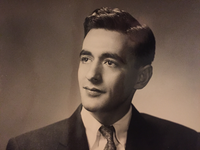 Louis Paul Sepe, died suddenly on December 17th, 2020. He was born Luigi Mariano Sepe, to Vincent Sepe and Laurina Nardone Sepe on April 17th, 1932. He lost his mother, with whom he shared a birthday, at the age of 7, a defining experience in his life. He was known as "Lou" by friends and neighbors, "Sep" by his wife, Cynthia, and "Gigi" or "Uncle Gigi" by his family in Millbrook, NY, where he was born, grew up, played basketball for and graduated from Millbrook High School. Lou met Cynthia, his wife of 69 years, on a blind date in 1950 in Millbrook where she was studying dramatic arts at Bennet College. Driven by his desire to use his talent to sing and their budding romance, Lou followed Cynthia to New York City, where both of them were to pursue careers in performing arts. They returned to the Millbrook area, to marry on November 24th, 1951, and went on to live in Poughkeepsie, Brooklyn and Pleasant Valley, NY before finally settling in Darien with 3 kids, adding 3 more by the time they were settled in the house where they have lived since 1960. Lou made his living in sales, working for years at Dichello Distributors in Milford, where he never missed a day of work. He remained in touch with some of his co-workers there up until his death. Lou kept singing when the kids were young, taking gigs in restaurants like Pagliaro's in Stamford, in the evenings. His resonant voice would cover songs from the likes of Sinatra, Tony Bennet, and Bobby Darin. He would sing with family at gatherings in Millbrook, or just around the house, either with music playing or just a capella, often forgetting the words to songs, as Cynthia would call out the correct lyrics. Lou was a voracious reader, especially drawn to historical biographies, and was an auto-didact, schooling himself in history, some of which he had lived through, and in politics, sports music and movies. He was a deft conversationalist, often engaging in passionate discussions around these topics. He had an incredible memory, watching old movies with him, he would rattle off the names of all the actors, even those in the bit parts. He loved playing golf, having started as a kid with his brothers, and making yearly pilgrimages in autumn to play in the Berkshires. In the last few years he mostly putted around the back yard, there are still a few errant golf balls lying around there, where he last chipped them. He enjoyed working around his yard, taking pride and enjoyment in the flowers and herbs and his butterfly bushes, delighting in identifying the butterflies and birds they attracted. Lou was a loyal Yankees fan and attended his first baseball game at Yankee Stadium in 1941 with his father and brothers. Lou especially enjoyed the social aspects of his part time jobs throughout his retirement at the Puritan and the Darien Donut. A devout Catholic, he never missed a Sunday in his role as a well-dressed usher at St. John's Roman Catholic Church. Welcoming parishioners was a social event and an important service to his church that he never missed. He was an introvert who loved people, couldn't get him to go to a party, but once there, he'd be the last to leave. He especially loved children, spending time with grandkids whenever he could, often throwing a ball, offering sport tips or getting down on the floor with the toddlers. Lately, the neighbors' kids were his adopted grandkids, he would never miss an opportunity to wave to them or talk to them over the fence. Unfortunately, he had yet to meet three of his great-grandchildren due to geography and Covid. Though a man of modest means, Lou was a generous contributor to many charities, especially St. Jude's Children's Research Hospital, Children International, Toys for Tots, Connecticut Food Bank, Feed America, the local volunteer fire department and his beloved St. John's, to name a few. In his work, his community and his family, Lou was known for being polite, kind, warm and generous in spirit. He had a typical "Dad" sense of humor that was playful, if cringeworthy, and a youthful energy, belying his 88 years, making his sudden passing all the more shocking to those who knew him. Lou's greatest source of comfort and pride was his family. He was the loving husband and, more recently, caregiver of Cynthia Muller Sepe, the father of Michael Sepe, of Sedona, AZ, Christopher Seppe (d.1989), Victoria Zebrower of Colonia, NJ, Suzanne Sepe of North Haven, CT, Anthony Sepe of Chester, VT, and Melissa Sepe Chepuru of Scarsdale, NY; loving father-in-law to Audrey Sepe, Michael Zebrower, Richard Glendon, Tish Anagnos, Susan Rizzo and Giri Chepuru; grandfather of Sister Christina M. Sepe, Fred Rizzo (Asha), Samuel and Gabriel Zebrower, Acadia M. Crouse, Shilpa Chepuru (Tom Prothero), Shanthi Sepe-Chepuru and Narain Chepuru; great-grandfather to Nora and Max Rizzo and Sebastian and Sienna Prothero. He is also survived by his brother Victor Sepe of Millbrook, NY, his sister Rosemarie Nielsen of Poughkeepsie, and several nieces and nephews, grand-nieces and grand-nephews. Lou was predeceased by his sister Congetta, brothers Vincent, Dominick and Richard, and sisters-in-law Doreen, Lila and Deya Sepe. Due to Covid there was a small family viewing and mass. A celebration of Lou's life will be planned when it is safe to gather. In lieu of flowers, please make donations in Lou's name to St. Jude's, Children's International, or a charity or community cause dear to your heart.