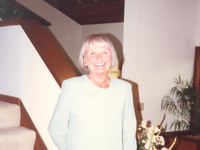 Ann "Daisy" Moylan Connell, 88, of Norwalk, passed away Friday, March 5 at her home, surrounded by her children and grandchildren. Born in Brooklyn, N.Y., on August 31, 1932, she was the only daughter of the late Hugh Michael Moylan and Marie Dermody Moylan. Ann graduated in 1954 from Notre Dame College of Staten Island, NY with a Bachelor of Arts degree in Education. She taught at Notre Dame Academy on Staten Island and with the New York City Public School System. Retiring in 1965. Ann is survived by her four children; Amanda Connell of Norwalk, Melissa Murphy of Wilton, John "Jed" Connell of Westport and Rebekah Gerace of Stamford; sons-in-law Gregg Murphy, Joe Gerace and daughter-in-law Grace Connell; her favorite son, Chris Connell; and her fifth child Kevin Quick. She has nine grandchildren whom she loved dearly: Christian Krog, Shannon Murphy, Ryan Murphy, Grace Connell, Elisabeth Krogh, Catherine Connell, Anthony Joseph "AJ" Gerace, Hugh Connell and Chloe Gerace. And her nieces and nephews; Edward and Nancy Murray; Chris and Sue Connell; Marilyn and Doug Barnes; Kathleen and Lou Motola; Peg Connell, and many others. Ann was predeceased by her husband, Edward Sparks Connell; nieces Sue Murray and Sharon Reuter; and nephew Jimmy Connell. Ann was a devout Irish Roman Catholic. Volunteering her time in the office of the Christian Faith Formation at St. John Church in Darien. Ann's favorite prayer was the Hail Mary. Ann was also an accomplished singer in her earlier days. She was often asked to sing in her childhood parish and at many weddings. Ann was an excellent marksman; enjoyed horseback riding for the attire; traveled extensively; was a voracious reader; loved and excelled at witty banter with family and friends; savored a great cup of coffee; but in all her 88 years had never once been to Philadelphia. Funeral services will be private (COVID Sucks). We would like to thank Constellation Hospice for their amazing care and support. We love you Daisy! Tapioca