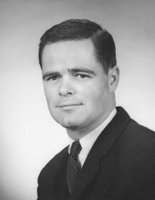 George Ratcliffe, a 55-year resident of Darien, Connecticut died peacefully on February 22, 2021 at age 92. He was born on June 22, 1928 in Boston, Massachusetts, the son of Samuel Edward Ratcliffe and Gladys Wilding Ratcliffe. George grew up in Manhasset, New York. At age 15, he took the train from New York to Seattle where he boarded the M/V Bellingham serving as a utility boy on its voyage to Alaska and back. Thus began his passion for all things marine. He attended the United States Merchant Marine Academy, graduating as an engineer in the first four-year degree class in 1949. He received an honorable discharge from the US Navy and the US Coast Guard for activity at sea at the end of World War II. In 1949 he met Jean Eilers, the love of his life, and they married in 1951. He then embarked on a career in the insurance and reinsurance industry, retiring as the CEO of Underwriting at Skandia America Reinsurance Company. He was a collector of marine art and artifacts, as well as an artist in his own right, who loved to create marine scenes at his easel during family summers in East Chop on Martha's Vineyard. A multi-sport athlete in his day and a lover of sports throughout his life (especially Auburn football), George never missed a UCONN women’s basketball game. He will be remembered for his gift of conversation, his genuine interest in people, his enviable memory and a sharp wit. He is survived by his three daughters, Susan Cameron, Kass Bruno, Lynn Biggart and her husband Bob, all of Darien, and his son Jim of Lolo, Montana. He is also survived by ten grandchildren and eight great grandchildren. He was predeceased by his beloved wife, Jean, his sister, Gladys Whitehouse, and his grandson, Benjamin Bruno. A family celebration of his life will be held at a later time. In lieu of flowers, memorial contributions may be made to the US Merchant Marine Academy AAF (Morale Fund), 300 Steamboat Road, Kings Point, NY 11024 or the Food Bank of Lower Fairfield County, 461 Glenbrook Road, Stamford, CT 06906.