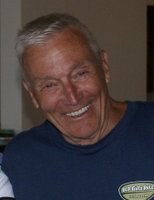 Frederick K. Morris, born August 25, 1935, died peacefully on Groundhog Day, surrounded by his loving family, finally succumbing to prostate cancer. Fred is survived by his brother Austin, married to Sandy; his children, Jeff and his wife, Lori; John married to Karen; Jen and her husband Dan; his closest friend, Genie Fortier and family; and his grandchildren Ellen, Tyler, Violet, Justin, Cole, Arden, Garrett, Luke and Caroline. He was married from 1960 to 1992 to Sue Mackay Morris, who passed in 2016. Fred and Austin were raised in Westfield, MA by Augustine (Gus) and Frieda Morris. Fred graduated Suma Cum Laude from Tufts University in 1956, with a BS in Mechanical Engineering. He later earned a Masters from RPI. He joined Hamilton Standard, an aerospace manufacturer, as a principal engineer. He rose to the company's executive management team, retiring in 2000. At the company he met Sue, his future wife, Harlan Brose, his lifetime hunting companion, Genie, and countless other lifelong friends. Fred was generous, and funny, drank vodka gimlets to prevent scurvy, and courageously leaped into skydiving and bungee jumping because they required no skill, just daring. He lived by example enjoying an active, robust life, surrounding himself with loving companions wherever he went. Due to the pandemic, a memorial service is not planned. Remembrances can be shared at: <a href="https://www.forevermissed.com/frederick-k-morris/about" target="_blank">Forever Missed</a> Gifts may be made to Dana-Farber Cancer Institute in memory of Frederick Morris to support cancer research at: Dana-Farber Cancer Institute, P.O. Box 849168, Boston, MA 02284 <a href="http://dana-farber.org" target="_blank">Dana Farber </a>