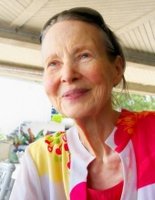 Jean Stockman Good died in December 2020 at age 95 in Darien, Connecticut. Born December 1, 1925 in Alamo ,North Dakota to George F. Stockman and Winnifred F. Stockman, Jean was the youngest of three children. She graduated from the University of North Dakota and continued graduate studies at the University of Chicago’s School of Social Work, while also earning funds for her education by modeling at Carson Pirie Scott in Chicago. It was at the University of Chicago where she met her husband, Walter Raymond Good. They married in 1949 and the couple celebrated their 68th wedding anniversary in February 2017, before Walter’s death later that year. She is survived her three children – Elizabeth Good Georgantas, Deborah Jean Good, and William W. Good – three granddaughters and seven great-grandchildren. Jean spent much of her adult life in Summit, NJ, where she raised her family and contributed significantly to the community there. She loved the arts and was both an avid painter and advocate. Jean was a driving force in the creation of the Summit Arts Center (now the New Jersey Center for Visual Arts) and was especially pleased to talk with artists, take classes and incorporate the arts into her beloved community. Given her strong background in social work she was also appointed to the New Jersey state advisory board for Greystone Park Psychiatric Hospital. After her children were grown, she and Walter moved to Darien, CT. Never one to shy from the opportunity to get involved, Jean became extraordinarily active in her new community. Her spirit of service and caring was especially evident in a program she started for local mothers with babies and young children while serving as President of the Darien Community Association. In addition to her many years of service with the Darien Community Association she also helped launch the Darien Nature Center. She happily shared her passions for art, education, nature and travel with her family, and she took exceptional delight in her grandchildren and great grandchildren—reading countless books and exploring the Nature Center together. In order to be able to see family as COVID-19 hit, Jean left Waveny Village, where she had lived for two years and moved in with her granddaughter, Katharine, and family in Darien. The family will hold a private memorial service in celebration of a remarkable woman and a life well-lived. Contributions may be sent to the Darien Community Association or the Darien Nature Center.