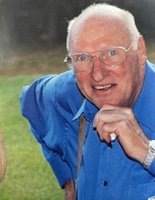 Frank Wilcox age 84, passed away on February 5, 2021. Frank was born April 4, 1936, in Santa Ana, California. At the age of 14, his dad was in the Veteran’s hospital and his mom abandoned him. He decided to run away from home hitch hike across country, where he ended up in Mr. Eva's home for homeless boys in New York City. From there, Mrs. Tjader Harris of Tokeneke took him into her home at the age of 15 to work on her property in Darien. Frank met his wife Civita while working as a lifeguard at Pear Tree Beach in Darien. He enlisted in the United States Air Force and served as a medic from 1954 to 1963. He completed Officer Candidate School, but returned to Darien and had six years with the postal service, becoming an officer in the Postal Association of Letter Carriers. He established his own upholstery business, Frank Wilcox Quality Upholstery that he ran successfully for over 30 years. He served on many political platforms in the town of Darien. He was a member of the town’s RTM. He became chairman of the RTM Town Government Structure and Administration Committee. In 1975, he was elected to the Darien Board of Selectmen. In 1989 Frank Wilcox ran for First Selectmen of Darien where he was defeated by a slim margin of 34 votes. He spent much of his free time an avid sports fan going to watch his daughter Marj coach high school swimming, as well as the biggest fan of his grandsons playing football for Darien High School where the crowd would anticipate his booming “Tic, Tic Boom” cheers. He is pre-deceased by his wife Civita, and his son John Wilcox a 20-year Marine Veteran. He is remembered most for his extremely generous personality and quick-witted sense of humor. He is survived by his loving wife, Lucille Wilcox and her family including William and Jean-Anne Madden, Michael and Jean Marie Madden, Vincent and Ann Gilberti, Tony and Theresa Gilberti, including 9 grandchildren. Vincent Gilberti, Michael Madden, Daniel Madden, McKenna Velazquez, Alex Gilberti, Julia Madden, Ryan Madden, Christopher Gilberti and Billie Marie Gilberti. Frank’s side of the family includes his daughter Marjorie Trifone and her husband Rob Trifone, son Lee Wilcox, his 8 grandchildren Kevin Joy, Jenny Joy, Christian Trifone, Bobby Trifone, Mark Trifone, Cami Wilcox, Emily Wilcox and Luke Wilcox. Memorial donations may be made to <a href="https://www.toysfortots.org" target="_blank">Toys for Tots/US Marine Corps</a>.