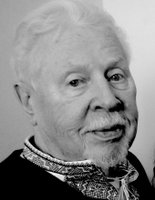 John Franko, Jr., a long-time Darien resident, passed away at home on December 24, 2020. He was a man of exceptional humor and mirth, coupled with deep reverence for things holy and divine. Born in the Bronx, NY, he attended Christopher Columbus High School and studied Geology at City College of New York before being drafted into the U.S. Army (101 Airborne Division, 7th Infantry,”Screaming Eagles”). John served in the Korean War, on the front lines, then later as an MP. Upon return to his civilian life, he resumed his studies in Metallurgy at New York University where he became involved in research and development for the Apollo Moon Shot program. He is the inventor on the patent for the zinc oxide battery that helped take the first rocket to the moon. While a graduate student at NYU, John met Anna Sarafiniuk, the woman who would become his wife, and they danced together for nearly sixty years. During his professional life, John held various roles, from research scientist, to Vice President and Controller at such companies as Leesona-Moos Laboratories, Electro Materials Corporation of America (EMCA), and Rohm & Haas. He also worked briefly as an independent consultant. Through his life, John was a devout Catholic, and he served the churches he attended with joyful purpose in a number of roles. Most recently at St. John Roman Catholic Church in Darien, he served as a choir member, member of parish counsels, and as a Eucharistic Minister. He loved and cherished the friends he made along this way. In his later years as his wife fell ill, he withdrew from many of these roles, but he still practiced the faith of such service in how devotedly he cared for his wife during her waning years. In the last few years of his life, John took pleasure in defying the term “once in a lifetime trip” by traveling around the world with his daughters. He enjoyed several trips to his parents’ homeland of Ukraine, as well sojourning to the American Southwest, coastal shores of the Atlantic, and visiting with beloved friends from both near and afar. When such travels wound down, his daily trips to Pear Tree Point Beach became an equivocal joy, especially in the summer when there were egrets to be counted. On the days there were none, he’d happily chide, “no rEgrets.” He was predeceased by his parents John (Sr.) and Katherine, brothers Teddy and Walter, and his beloved wife, Anna. He is survived by his daughters Eva and Julie Franko, as well as his sister-in-law Gail, nephew John and his wife Tiffany, nieces Dina and Kara (Vandivier) as well friends whom he took to as his own family.