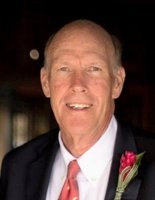 Wallace J. Gamber Jr. passed away on June 26 after a brief battle with cancer. Born in 1949 in Detroit, Michigan he was the son of Emily McLaughlin and Wallace Gamber. Wally attended Saint Matthew’s School in Detroit and graduated from Grosse Pointe University School (now University Liggett), Class of 1967. While there he was a member of the 1965 undefeated football team, varsity basketball and track teams. After graduation he headed south to Rollins College in Winter Park, FL where he was a member of the Varsity crew and Kappa Alpha Order. Wally met his wife, Deborah Dwelley, in Winter Park shortly after college and moved north to Greenwich, CT where he worked for International Packaging Systems. They married in 1981 and moved to Darien to raise their family and stayed for more than 30 years. Wally was Key Account Manager with KHS Inc. (packaging machinery) for the majority of his career traveling the world with frequent visits to corporate headquarters in Sarasota, FL. He was a friend of Bill W for 33 years. Having grown up on the Great Lakes Wally was always drawn to the water, both salt and fresh. He enjoyed his years as a member of Roton Point Club in Rowayton, CT and long walks on Singing Beach in Manchester-by-the-Sea, MA, Newport, RI, and Palm Beach,FL. He spent his summer vacations on the shores of Sebago Lake in Raymond, ME for more than 25 years and loved to hear the waves lapping on the sand and the loons calling at the edge of the cove. He is survived by his beloved wife of 39 years, Deb, children Dorothy and Chip, son in law Christian Friedrich, a granddaughter and twin grandsons. His family requests that friends freely share stories and memories by sending them to rememberwally2020@gmail.com. His ashes will be interred at the family plot in the historic Poughkeepsie (NY) Rural Cemetery. Contributions, in lieu of flowers, can be made in his memory to the Rollins College Crew, 1000 Holt Avenue, Winter Park, FL 32789 or University Liggett School,1045 Cook Road, Grosse Pointe Woods, Michigan 48236.